The reading order (and synopses) for the J. D. Robb "In Death" series and more reviews. 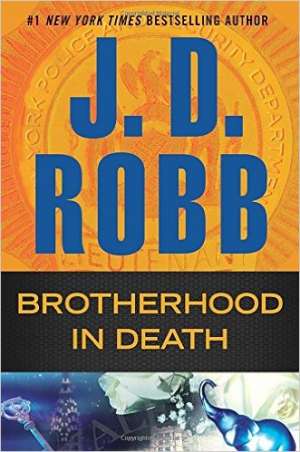 The tough, unsophisticated homicide Lieutenant Eve Dallas and her slick and stylish billionaire husband Roarke are back again. This time the death is close to home.

Dallas has always had a bit of a crush on Professor Mira. Husband of the psychologist, profiler and substitute mother Dr Charlotte Mira, Professor Dennis Mira is charmingly befuddled and unexpectedly insightful.

When his brother is killed, Eve and everyone who knows Mr Mira believe he is innocent. They must, however, prove it.

J. D. Robb, as is no secret, is the pen name of the incredibly prolific Nora Roberts. The In Death series is set in 2060s New York, with each novel or novella following fast on the heels of the previous story. Roberts gets to play with science fiction elements, hard and soft. There are flying cars and glides, longevity and legal same sex marriage, sex work and recognised cohabitation.

Roberts also gets to indulge herself in her love of continuing series (she often writes trilogies, and is said to write a Nora Roberts series, then three In Death stories). She also gets to intersperse her crime novels with the continuing relationships of her characters.

In over 40 novels the readers meet and come to know the small cast of characters who comprise Eve's personal and professional life. Her partner Peabody, Peabody's cohab partner who is, like Roarke a tech expert, the Miras, Eve's best friend Mavis and her little family, and the successful reporter Nadine. Just to round things out, there is the bane of Eve's existence, her husband's butler and man-of-all-work Somerset. Somerset's past is as shady as Roarke's, and since he raised Roarke since he was a lad, Somerset is frighteningly close to being Eve's father-in-law who washes her undies.

Does this sound like a run-of-the-mill crime series? No, but it is one of those series for people who like a bit of crime and mystery, and also to get involved in the character's lives.

Fast-paced, sexy, filled with intrinsic humour, this series is something special. For those who become fans, addictive and never disappointing.