The Space Race is On (Again)

The warm, soupy aroma of marijuana hung about his shoulder-length blond Jesus hair.

He was a large young man, barefoot, wearing damp burnt-orange board shorts and an olive drab T-shirt. When he came out of the ramp, he flinched: movement on the roof of a building down and to his right. A microsecond after the flinch, he recognized it as a Pasadena parrot, rather than a sniper. That was good. 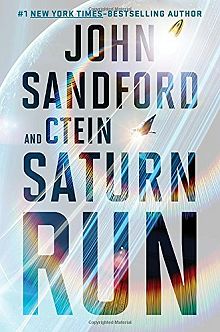 In two years Sanders Heacock Darlington would inherit LOTS of money. In the meantime he was passing his time at Caltech's astronomy department, coming in late, sleeping with his co-workers, and generally being known as the man who 'couldn't change a tire'.

Nobody thought that much of him, which is why it was so unfair that he was the one who first SAW, who IDENTIFIED, an object obviously making course corrections to rendezvous with a body in Saturn's rings.

John Sandford is an excellent author of taut tales written with an edge of humour. Ctein in an internationally known artist.

Together they have put together a hard science fiction story to satisfy science geeks and those who like a character-driven story.

Full disclosure: I was a science fiction fan. But somewhere in the late twentieth century SF became more weird fiction and speculative fiction became dark, or full of magic realism, or fantasy hidden in the SF shelves of the bookshops.

Saturn Run is the 'real deal'. It takes logical extrapolations of current and developing technologies, and possible future technologies, and uses them CONSISTENTLY to make a story. Yes, it takes advantage of the rule that an author can use one impossible thing, but must stay true to the concept. And yes, maybe, just maybe, it can be a cautionary tale.

But a hopeful one.

Whatever else it is, science fiction at it's best is ultimately hopeful. No matter how dark the future, how terrifying the consequences of hard science or social science, science fiction tales are told in the hope that we will avoid any pitfalls the authors foresee.