See also:
David Gerrold answers The Usual Questions
David Gerrold and The Crunch of Ideas
Our Reel Life column for the latest First Looks
Our Coming Attractions section for release dates
Our Facebook page for more news and reviews 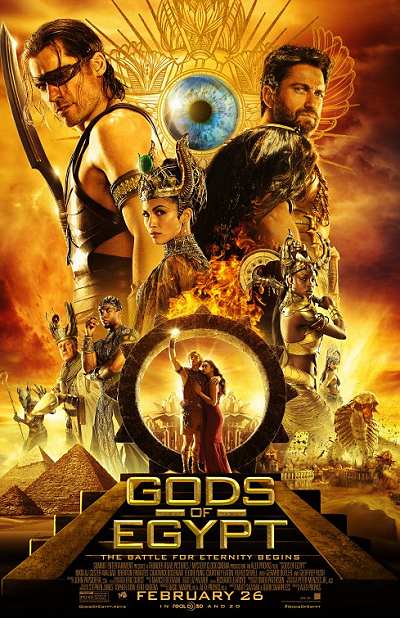 Movie poster, Gods of Egypt
All of Heaven is at war

Mortal hero Bek teams with the god Horus in an alliance against Set, the merciless god of darkness, who has usurped Egypt's throne, plunging the once peaceful and prosperous empire into chaos and conflict.

Last night's movie was GODS OF EGYPT. It pretends to be a good popcorn muncher. It isn't. The last third just falls apart by trying to do so much that none of it really makes any dramatic sense.

I mean, they tried. There's a good story setup -- a young thief (think Aladdin) and the young woman he's in love with -- who have to help the oversized God, Horus. All the Gods are oversized, that's how you know who's a god and who isn't.

But the kid who plays the young thief -- he's miscast. He's pretty enough and acrobatic enough, and in the right part he could be another Luke Skywalker -- but this part needs someone older, an Antonio Banderas type -- someone whose had some serious experience as a thief, so we can believe he's as resourceful as the script demands. Think Douglas Fairbanks in the silent Zorro. We need to know he's had enough of life that the very important love affair isn't just another hormonal teen romance between two naïve adolescents. (Well, they could have made him sparkle in the sunlight, that would have been worse.) But Hollywood doesn't believe anyone over the age of 22 is capable of real love, I guess. 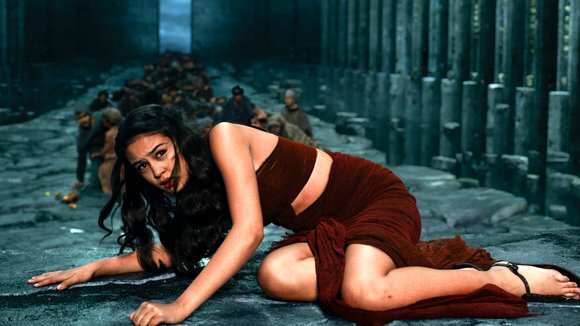 Then there's a war between the Gods, which is kinda pointless, because the so-called Gods are even worse behaved than the ordinary people. As Gods, they're pretty pathetic -- and we're supposed to care about their battle...?

The young thief, Bek, and the God Horus develop a friendship as they have their necessary adventures -- the usual journeys and fights and gathering of stuff necessary for the important climax, with lots of special effects along the way. The direction is adequate, but there's way too much flying camera stuff.

Added to this are some additional subplots about this and that and the other, with the thief's great love walking the path to the ninth gate of judgment in the underworld, and will she have enough treasure to buy her way into the afterlife and ... 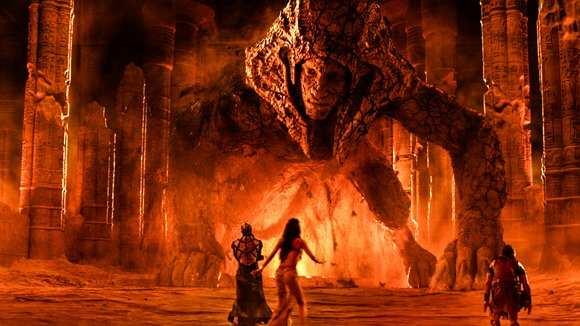 Meanwhile the Gods are hurling lightning at each other flying around the landscape while the giant tornado beast is sucking up the Nile and it turns out Ra isn't dead after all, he just needs his spear, and by the time we get to the mandatory devastation of the tower and the surrounding city, it's just the usual big boring special effects stuff that somebody thought was more dramatic than any actual confrontation.

Okay, on paper, it must have looked like they touched all the bases. I could argue that they set up everything they needed and they used everything they set up -- but by the time we finally get somewhere, I just don't care. And that's the picture's big failure. It fails to engage on an emotional level. 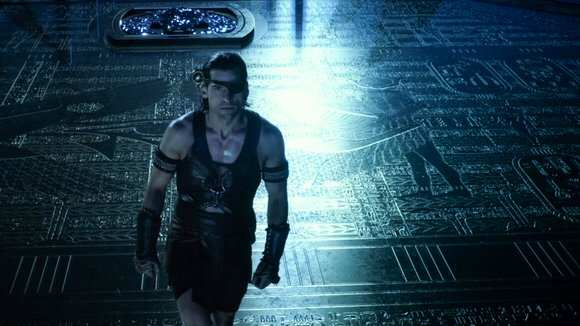 The one relationship that we're supposed to care about the most gets resolved with a literal deus ex machine (god of the machine) which despite everyone saying it's impossible, we knew was inevitable anyway, because it's another one of those dreadful Hollywood tropes -- nobody dies for real. Not Trusty, not Baloo, not Obi-Wan. They all come back, somehow. It's a cheat.

A couple more points: Visually, they created a fantasy landscape of an Egypt that never was -- but it's all done in shades of red-brown sandstone, with some gold and black trim. There's nothing green in the entire picture. That's when it isn't too dark to see what's happening. Visually, this great grand city should be spectacular, but it's just more of the same CGI sprawling landscape-to-impress without any real sense of place.

Oh -- and the 3D is meh. Hit the pause button and you can see that it's badly processed and it's all cardboard cutouts pretending to be 3D. On the plus side, it's not boring. It's fast-paced enough that you won't notice it's an imitation of a movie instead of a real movie. At least, not until the credits roll...