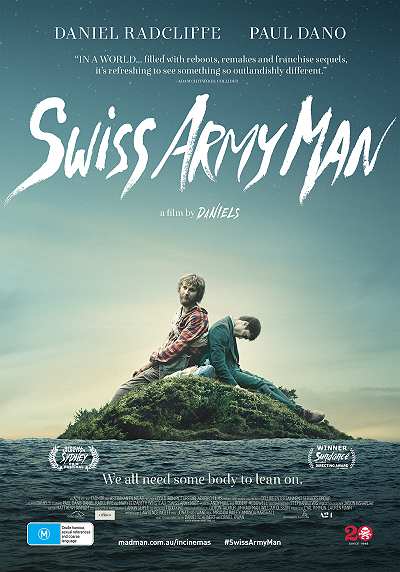 Movie poster, Swiss Army Man
We all need some body to lean on

Lost on a lonely island, Hank is about to end it all when he finds a dead body to keep him company. The body turns out to a amazingly useful - a swiss army man.

Before you go there, this is not a story about cannibalism. Hank (Dano) is lonely, bored, hungry, and reduced to sending messages out to sea on litter. He starts small and builds increasingly complicated rubbish ships.

Just as he is about to give it all up, he sees a body on the beach (Radcliffe). Will it be friendly? 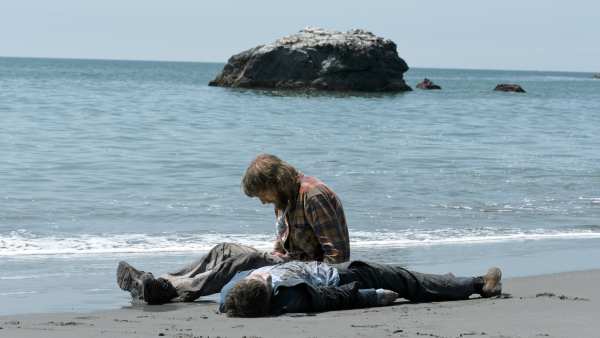 Let's not get bogged down with reality here. Swiss Army Man takes a step out of the mundane and real with the corpse who shall be known as Manny. The farts from his decomposing body propel him across the water with Hank riding him. When they next reach shore, Hank decides to take Manny with him as he tries to find rescue.

Manny proves himself useful in many ways, and as the journey progresses he begins to communicate, asking questions about the nature of life, and Hank's life in particular.

Hank builds increasingly complicated sets as he works to survive, and to trigger responses in Manny. He is also willing to try a little role play.

The result is a delightful film that takes chances in order to examine our world and our place it in. It is amusing, entertaining, sad, and ultimately an example of clever filmic storytelling.