One Take Wonder That Is Close To Perfect

For more recent reviews and first looks, see this month's column in Festivale. We also post news, reviews and trailers to Reel Life's Facebook page and trailers and clips on our YouTube Channel. Join in the discussion on Facebook

For more recent reviews and first looks, see this month's column in Festivale. We also post news, reviews and trailers to Reel Life's Facebook page and trailers and clips on our YouTube Channel. 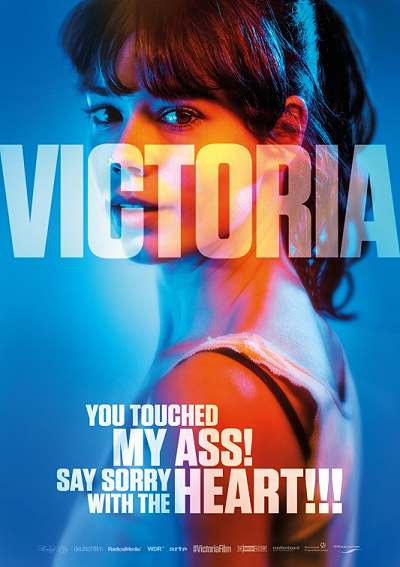 Movie poster, Victoria
One girl. One city. One night. One take.

A young Spanish woman who has newly moved to Berlin finds her flirtation with a local guy turn potentially deadly as their night out with his friends reveals a dangerous secret.

Victoria is that rare beast of a film called a "one-shot feature film" (also called "continuous shot feature film") a full-length movie filmed in one long take by a single camera. Some films manufacture the effect but the director of Victoria Sebastian Schipper and his crew managed to do it by the third attempt. The result is magnificent. I really like this film. I liked it even before I found out it was the product of a technical feat. It has the spontaneity of a life lived in the moment, without realisation of the consequences until much later. It is a small fire that burns to a blaze and then dissipates with the dawn.

Victoria is set in contemporary Berlin and covers the time frame of a night and a day in the life of Victoria and a ramshackle group of young men she meets in the street after she leaves a grunge bar dance club. This is all we know and it is with this we as the audience begin to discover the lives of the film's protagonists: Victoria, played by Laia Costa, and Sonne (Frederick Lau), Boxer (Franz Rogowski), Fuss (Max Mauff), Blinker (Burak Yigit) and finally Andi (André Hennicke). You get the impression that these young fellows are representative of those East Berliners seeking for a future, the next generation that there is no room for. This group form an unlikely alliance as they try to ameliorate the effects of a debt that Boxer owes to men who protected him in prison - a debt that cannot be avoided but leads to a horrifying price to pay. All in a day and a night.

Apparently the original script consisted of twelve pages, with most of the dialogue being improvised. The energy and completeness of the piece is captivating. The quixotic nature of the night world they are in, the delicate nuance of their developing acquaintanceship paralleling the hard reality of the challenges being presented to the group. Challenges they all meet with genuine humanity. The drama is tight, the audience is always guessing and the actors are like real live people served up to tragedy. Or is it a story of survival?

To tell you the truth Victoria had the same gritty engagement with contemporary life that early '80s Australian cinema had, the same eye opening lack of fitting a story into the hero's journey for sales type of feeling. They are making films fast and loose with tantalizing results.

Victoria was screened in the main competition section of the 65th Berlin International Film Festival where it won the Silver Bear for Outstanding Artistic Contribution for Cinematography. It received the German Film Award (commonly known as the Lolas) in six categories, including Best Feature Film. It clearly made a splash on the German scene.

Now it is up to you to go along and add your voice of approval to this gripping, delightful and terrible film.?