Other reviews of Stephanie Plum books are linked to these pages. 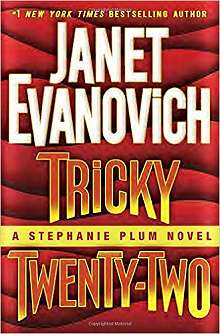 Stephanie Plum is sent after a popular frat boy. Steph and Lula in a frat house just has to turn ugly. Gobbles has been charged with attacking the college president. When said president is gunned down Steph, homicide cop Joe Morelli and the super-hot, super-security guy Ranger are drawn into the investigation.

Stephanie Plum is not the world's best bounty hunter, but she is the luckiest. Apart from an almost inexplicable knack of finding skips, she has a hot boyfriend (cop Morelli) and the amused interest of another alpha male, Ranger.

She prevails through determination, an ear to the local grapevine in 'The Burg', and a willingness to just keep trying. Her exploits are legend, occasionally dangerous, and usually as messy as a pie fight.

Janet Evanovich has her own style, part humour and part romance. She has a fondness for her characters that doesn't prevent her from showing them at their worst. Her books are a quick read. Like the donuts Steph loves so much, these books are quickly gobbled down and just a bit more-ish.

Other reviews of Stephanie Plum books are linked to these pages.