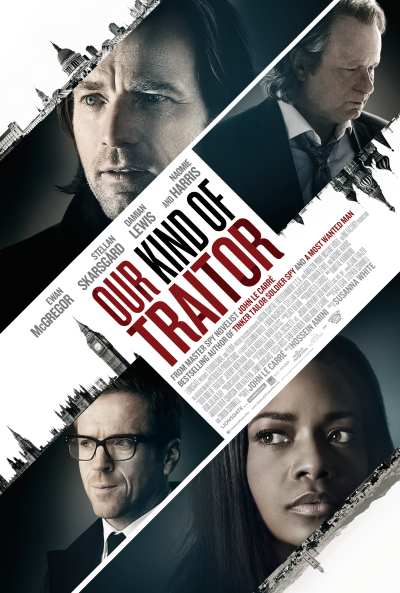 Movie poster, Our Kind of Traitor
Who can you trust with the truth?

A British couple on holiday find themselves caught up with the Russian mob, and a mob accountant's desire to save himself and his family from imminent death.

Perry (Ewan McGregor) and Gail (Naomie Harris) are repairing their relationship in Morocco when Perry encounters Dima (Stellan Skarsgård). Perry finds himself reluctantly befriended by Dima, and then asked to carry a USB stick to MI6.

Perry and Gail return to London only to find that they are called upon to act as go-betweens. They are basically two nice people, an academic and a barrister, whose compassion and sense of 'fair play' won't let them walk away.

Dima is the relic of bygone days when even mobsters were honourable men. But the new mob prince is not so trustworthy. Are MI6?

Dima's family are his priority, Dima's information is MI6's priority. As the story unfolds we see the traps that characters are setting for themselves and others. So much is against Dima, and he has to trust strangers with his family's lives, and his own.

The web of motivations and cross-purposes, the possible unfaithfulness of any character, all these things combine to create trap after trap that must be navigated.

Carefully crafted in story and visuals, with believable performances and interesting settings, Our Kind of Traitor is and engrossing tale waiting to be enjoyed in full.