Search Festivale for more work by an author.

Writes author Allan Cole, "I was blessed, or cursed, with the knowledge that I wanted to be a writer at the age of five. I decided when I grew up I'd be an author like Poe. And from that moment on I made a point of observing everything closely for future reference."

I teamed up with Chris Bunch, a remarkable writer whom I'd first met in my senior year at high school. 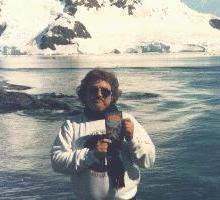 It took three years writing thirty five hours a week to break in. At the same time I held down a prestigious full-time job as the national news editor of a major LA daily.

Then it happened. The Gods of Writing smiled and in the summer of 1979 we sold the first novel - Sten - and first teleplay - Quincy - in the same month. I quit my job and became a full time free-lance writer. I never looked back.

Has your interaction with fans, for example, at conventions, affected your work?

Feedback from readers has a definite - and immediate - impact on my work. Not from conventions, as much as internet connections where I encourage readers all over the world to interact. In the snail mail-only days conventions were about the only way you could connect with readers. Mainly, because all letters were sent to the publisher, who would sit on the letters for two small folders and by the time the author got them they were deep into other work.

Is there any particular incident (a letter, a meeting, a comment that stands out?

When Chris and I published our Vietnam novel - A Reckoning For Kings - we had a great deal of mail from women readers who thanked us for giving them insight into what their brothers/fathers/husbands/boyfriends went through in wartime. It gave us ammunition to use against our publishers were convinced that women didn't read books involving the military. Which helped us grow our audience for the Sten novels, which are military SF.

Do you have a favourite author or book (or writer or film or series) that has influenced you or that you return to?

When I was five years old my father - who had a marvelous reading voice - read Poe's The Raven to me. Although I didn't understand everything that was going on in the poem, the feelings the words invoked made me decide right then and there that I wanted to be a writer some day. So I could make other people feel the same way.

Who is the person you would most like to be trapped in a lift with? or a spaceship?

Who is the person you would most DISlike to be trapped in a lift with? Or a spaceship?

What would you pack for space? (Is there a food, beverage, book, teddy bear, etc that you couldn't do without?)

What is the most important thing you would like to get/achieve from your work?

I've lived all over the world. Stepped foot on every continent - except Australia. And I've learned that there is a common chord that resounds through all humanity. I try to share that knowledge with my readers.

What is the special satisfaction of your work?

The sheer act of writing.

For other answers to The Usual Questions Click here

Here is a link to my bibliography/filmography