Batman Park is one of those odd pieces of green on the city map. Although it may once have been a disregarded corner of land bounded by bridges and the brown Yarra River, it is now part of a revitalised section of Melbourne. 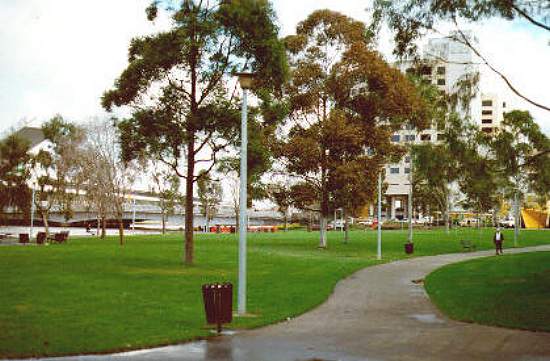 Surrounding the park are the World Trade Centre (one of the few places in Melbourne capable of handling meetings of 1,000 or more), the new Exhibition Centre, and the Crown Casino.

I was one of those who argued for the removal of Ron Robertson-Swann's Vault from the Melbourne City Square.

It now stands in a hard-edged commercial corner of Melbourne where tourists and convention-goers and exhibition-visitors are drawn. The force of Vault's yellow planes and strong edges makes the right statement in this spot. Tough, brash, simple, and unashamed.

Well, it should. And it could. But not in the terribly neglected condition in which I found it. The edges where softened by nicks and bumps, and the yellow was polluted by over-washing and abuse.

While it may not have been welcome amongst the grand old stones of Swanston Street, Vault is a acquisition of which Melbourne should be proud. It has strength and character, and its controversial history commands a place in the story of Melbourne. 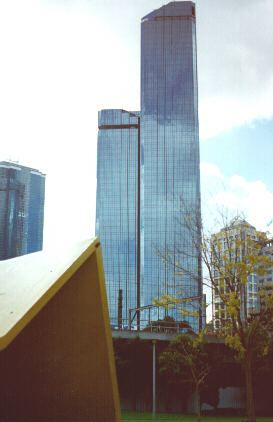 For the boulvardiers who sit and sip coffee from the opposite banks, Batman Park is part of a complicated landscape. The muddy river with its traffic of pleasure craft separates Batman Park from the Casino complex. Behind Batman Park is the elevated railway track, and behind that, the Melbourne buildings.

This isn't a park to take the kiddies for a carefree picnic, however, as it has a high wind warning. They built a helipad floating on the river, and the helicopter traffic, though interesting, is noisy and could blow your picnic plates away.