Last Issue: What is this thing with Zombies!!! (Dee Leana Carter) 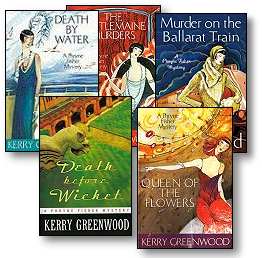 Sometime contributor Trevor Keher sent a message wanting recommendations, "something to read". I responded on Facebook, but here are my suggestions for series that are worth reading and will keep you off the streets for weeks to come.

While Burke is clearly a white hat, Landry is driven by things that cross lines that even he wouldn't cross. He is probably a sociopath, but there is nothing he won't do for the people he has bonded with.

For the reading order of the Cyril Landry books and links to our reviews, click here.

John Sanford's Lucas Davenport / Prey series. Which also interacts with his Virgil Flowers spinoff series, and his Kidd and LuEllen series. I have produced a reading order for these so you don't get any spoilers. Hard man, tough lawmaker type series set in Minnesota.

Once again, this is a series with a flawed protagonist. Sandford draws a fascinating view of Minnesota, with little details that make it so much more real to the reader.

For the reading order of the Lucas Davenport / Prey series, and links to our reviews, click here.

Some military SF from someone who has obviously been in the military. Tanya Huff's Valor series is damn good reading. Do you know Ms Huff better as a fantasy writer? Her Blood / Vicki Nelson series has been made into a television series.

In the Blood novels, Nelson, an ex-cop encounters a variety of different supernatural beings in her native Canada. Later novels centre around the vampire Henry Fitzroy (bastard son of Henry VIII, and Tony.

For the reading order of the Valor series, click here.

For the reading order of the Blood and Smoke series, click here.

Another series with a tough ex-military heroine is Zoe Sharp's Charlie Fox series.

Charlie was British special ops, she teaches martial arts and acts as a bodyguard.

Lawrence Block's Burglar (Bernie Rhodenbarr) series is a fun crime series based in New York. Bernie is a thief, and damn comfortable with it. The style is witty, and the author (and character) is not afraid of a running gag.

The ultimate "It takes a thief" series. Notable also for the fact that male white Bernie in the books became female black Bernie (Whoopi Goldberg) in the film.

Melbourne author Kerry Greenwood is perhaps best known for her Phryne Fisher series, about the wealthy (but born poor) Jazz Age detective living in Melbourne. It's now a television series.

For a different Melburnite, Corrina Chapman is a baker who lives in a quirky building in Flinders Lane. Corrina is a large lady who enjoys baking, feeding people, spending time with her friends and her Israeli boyfriend. She doesn't so much investigate as 'look into' things.

Recipes are included at the back of the novels. Pop culture references abound. Be prepared to meet the Melbourne of the back streets.

For more series, check out our Series Series.

The Ditmar subcommittee are pleased to announce the ballot for the Australian SF ("Ditmar") Award for 2016. Voting has now opened, and will remain open until one minute before midnight AEST (ie. 11.59pm GMT+10) on Friday, 18th of March, 2016.

The Ditmar Award (formally the Australian SF ("Ditmar") Award; formerly the "Australian Science Fiction Achievement Award") has been awarded annually since 1969 at the Natcon to recognise achievement in Australian science fiction (including fantasy and horror) and science fiction fandom. They are named for Ditmar "Dick" Jenssen, an Australian fan and artist, who financially supported the awards at their inception. - wiki.sf.org.au

Monash University in collaboration with the Emerging Writers' Festival is proud to present the Monash Undergraduate Prize for Creative Writing, a prestigious prize for emerging literary voices.

The prize is open to both Australian and New Zealand university students, enrolled in either an undergraduate or honours degree. All types of creative writing will be accepted, including short stories, non-fiction narrative and narrative verse.

Monash has been the long-term education partner of the Emerging Writers' Festival, and the Prize strengthens both parties' commitment to providing learning and career development opportunities for emerging literary voices.

Australia's second oldest city is once again preparing to welcome a diverse and high-profile group of novelists, poets and media personalities for the city's fourth Newcastle Writers Festival (April 1 -- 3) which has already become a key fixture in the region's rich cultural calendar.

This issue in Festivale

Our interview with the prolific writer of fiction and non-fiction, Lawrence Block.

A U.S. initiative is designed to get ebooks to disadvantaged children.

Open eBooks, ?a new initiative and e--reader app that will make thousands of popular, top--selling eBooks available to children in need for free was laumched in February 24, 2016.

A coalition of literacy, library, publishing and technology partners joined together to make the Open eBooks program possible. The initiative's partners ---- Digital Public Library of America (DPLA), First Book, and The New York Public Library (NYPL), with content support from digital books distributor Baker & Taylor ---- created the app, curated the eBook collection, and developed a system for distribution and use. They received financial support from the Institute of Museum and Library Services (IMLS) and content contributions from major publishers. National Geographic announced today that they will provide all of their age--appropriate content to the app, joining publishers Bloomsbury, Candlewick, Cricket Media, Hachette, HarperCollins, Lee & Low, Macmillan, Penguin Random House, and Simon & Schuster, who made commitments providing thousands of popular and award--winning titles last year.

Adults who work with children in need through libraries, schools, shelters and clinics, out--of--school programs, military family services, early childhood programs and other capacities can qualify for Open eBooks credentials by first signing up with First Book and then requesting Open eBooks access for the children they serve. Students can download the free Open eBooks app to their individual devices from the App Store or Google Play and enter their access code to start enjoying Open eBooks.