Visit to an Old Friend

Batman Park was one of the first places I visited when I began the database that has become the Pictorial Guide. It was a popular spot with local office workers, mainly the legal and stockbroking types who worked in the Spencer Street end of Collins Street. 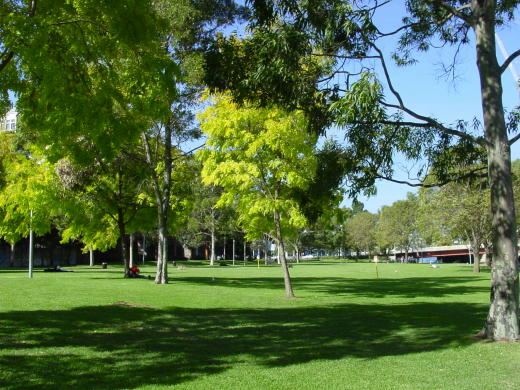 With the many changes to Melbourne -- more inner city livers, a busy World Trade Centre (one of the few places in Melbourne capable of handling meetings of 1,000 or more), Exhibition Centre, Convention Centre (does that include the World Trade Centre? I never am sure) and of course, the Crown Casino. 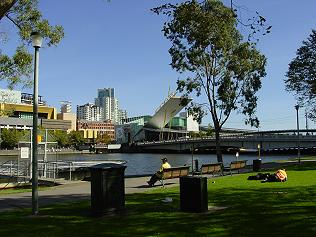 Yes, I admit I received some criticism for referring to Ron Robertson-Swann's Vault as the Yellow Peril, the name people knew it by when it was erected in the Melbourne City Square. It no longer stands in Batman Park, moved on with the redevelopment of the Southbank Precinct.

Besides grass, trees, and Melbourne's own old muddy, the Yarra River, the focal point, sadly, is the Helipad.

It's very exciting to have the news choppers landing if you're sipping coffee across the river or a family tourist group, but Batman Park is far less functional and liveable as a park with the nasty rotor blade winds whipping picnic plates to the ground. Mind you, the helipad gives the seagulls a lovely waterfront resting place. 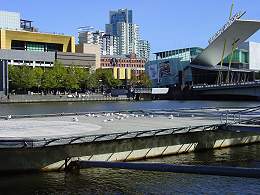 A big surprise of this visit was the view of Jeff's Shed (the Melbourne Exhibition Centre named by the locals for a past premier) from Batman Park. That's one of the joys of travelling around with a digital camera, the odd glimpses that show the context of Melbourne -- the river, the coffee places, the slow old river and the gardens amongst the buildings and railway tracks.